This article by Rezwan first appeared on Global Voices.

On January 23, 2019, the Thousand Movement, a collective of unions and grassroots activists, held demonstrations in 30 locations across Sri Lanka calling on plantation companies to increase the daily basic salary of tea estate workers to Sri Lankan Rs.1000 (US$5.50) or double the current minimum daily wage. Protesters say that poverty is on the rise among the tea workers as wages stagnate in comparison to the growing cost of living. According to Chinthaka Rajapakshe, Moderator of the Movement for Land and Agricultural Reform (MONLAR):

“Recently researchers from the University of Peradeniya found that Rs 27,707 (US$ 152) is needed per month for one person in the estate sector to meet his or her basic needs. But on average these workers get paid less than Rs. 8000 (US$ 44) a month.” 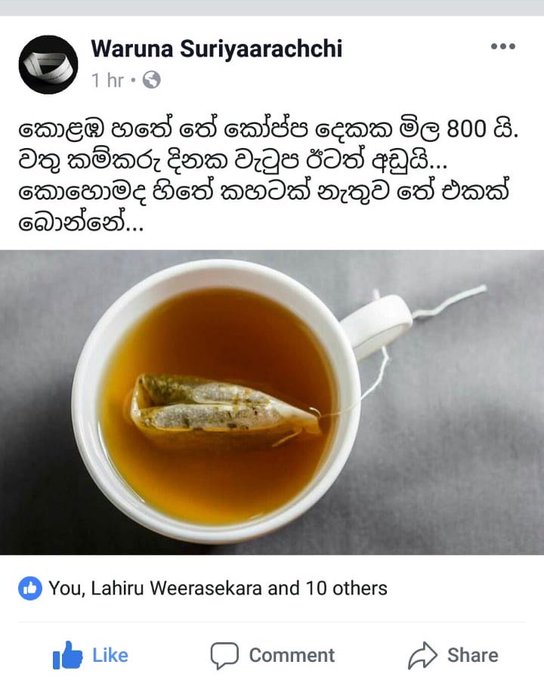 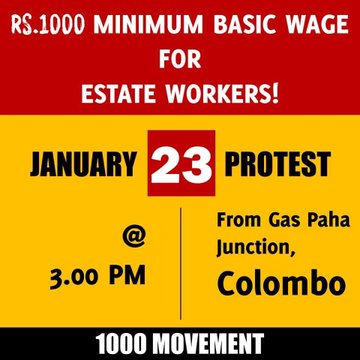 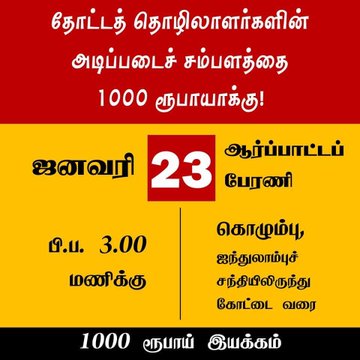 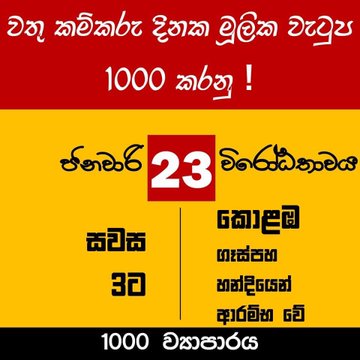 Mari@Mari_deSilva
Generations of #plantationworkers have propped up our economy by toiling under deplorable conditions from 6am-6pm, come rain or shine. Don’t the producers of the “Pure Ceylon Tea” we proudly boast of deserve a decent day’s wage at the very least? #1000wagehike 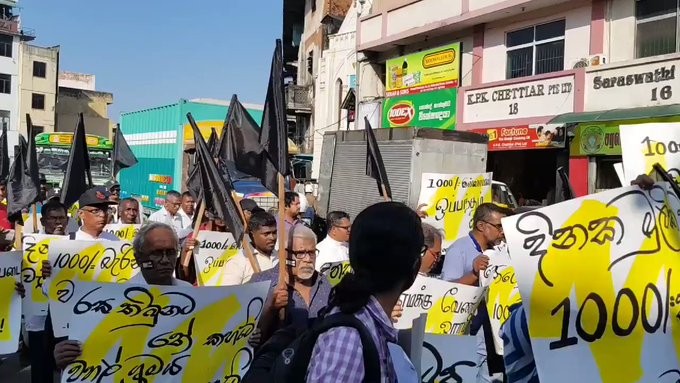 Groundviews✔@groundviews
‘Companies say they don’t have profit, govt says it doesn’t have money, ministers make so many promises, the workers want only Rs. 1000 daily basic wage for the work they do’ – video of the protest along Gasworks Junc to Main Street, Malwatte Rd and Olcott Mw. #lka #SriLanka

22 people are talking about this

The workers have been protesting since last October after a collective agreement on the salary hikes of estate workers was not signed. The workers rejected a 20 percent (Rs.100) increase proposed by the Employers’ Federation of Ceylon (EFC), an organization that represents plantation companies. 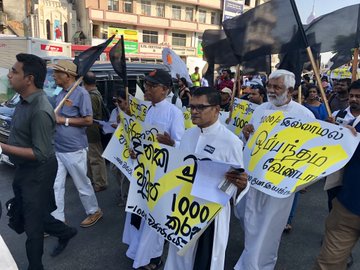 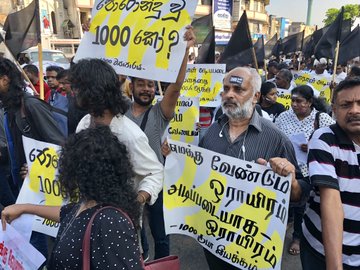 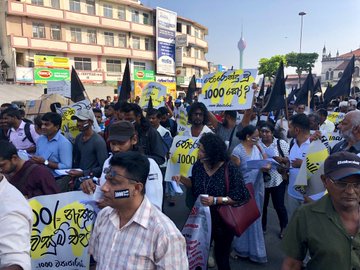 30 people are talking about this

On December 6, 2018 hundreds of thousands of plantation workers from all of Sri Lanka’s tea plantation districts began an indefinite strike demanding a 100% hike of thier daily basic wages to Rs.1000 (US$5.50). The protesters called off the strike a week later after the Ceylon Workers Congress (CWC), the main plantation union, ordered them to end all industrial action. Many people from civil society, including school teachers, also rallied for plantation workers. 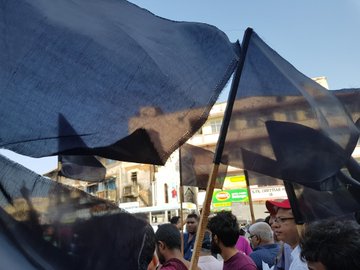 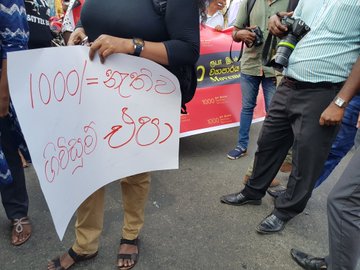 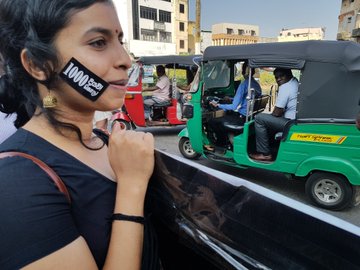 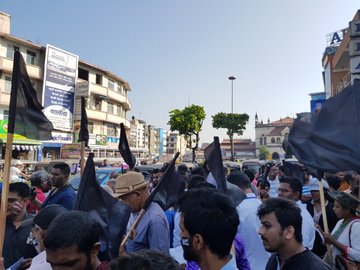 ‘For 200 years, they’ve built the economy, and the name ‘#CeylonTea‘ – pay the estate workers a fair wage’ – protest in solidarity with estate workers demanding a daily basic wage of Rs. 1000, happening now at Gasworks Junction in Fort. #lka #SriLanka

The tea industry in Sri Lanka

Sri Lanka is the fourth largest producer of tea in the world and also the second largest exporter. The country’s central highlands and low-elevation areas boast numerous tea estates which benefit from a climate that produces high-quality tea. Over the years, tea from Sri Lanka or “Ceylon Tea” has grown in popularity — almost one-fifth of the teas sold around the world are from Sri Lanka.

The industry employs (directly or indirectly) over 1 million people. Many of the 500,000 tea estate workers are Tamils descended from cheap laborers brought to Sri Lanka from India by the British colonial rulers in the 19th century, and more than half of the workers are women.

Traditionally, workers have been paid severely low wages compared to the national average. In many cases, they have to collect 16kg to 18kg worth of tea per day or their pay is halved. They are subjected to harsh living and working conditions, and some of them sustain painful injuries with little medical support from the tea estates.

Approximately a decade ago, they were protesting to increase the daily wage to 500 rupees (US$4 in 2009) from 290 rupees (US$2.5 in 2009). But their demands were not met as the industry was hit by the global recession and some tea estates were forced to lay off workers.

In 2016, their daily wage was increased by a mere Rs.50 to Rs. 500. Over the years, the Sri Lankan Rupee has depreciated while the cost of living has increased. Their daily wage corresponds to US$2.75 in today’s currency, so, in essence, their wage has not increased in a decade.

As a result, the poverty level among plantation workers has increased, although the overall poverty in Sri Lanka has declined in the past decades: 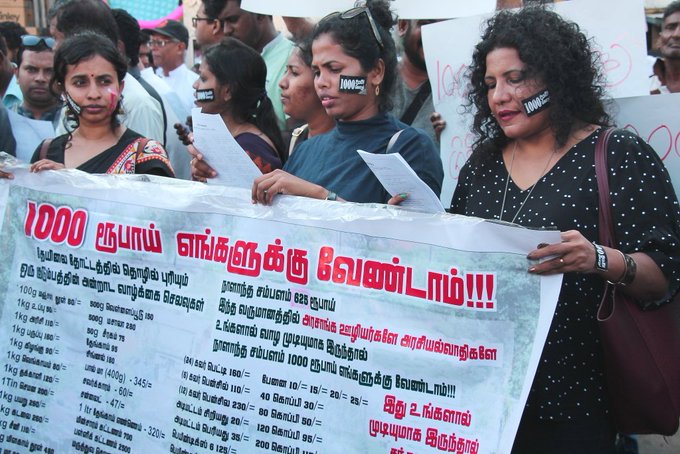 Lisa Fuller@gigipurple
Replying to @gigipurple
(3/3) “Political leaders, if you can survive on Rs 625/day, then we don’t need Rs 1000/day”Protesters today challenged politicians to live on Rs. 625/day- the same wage proposed for #plantation workers in the collective bargaining agreement. #ceylontea #lka #SriLanka 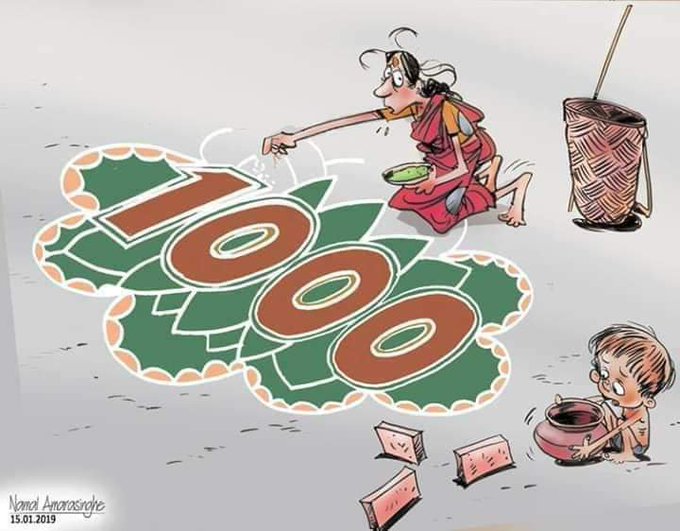 The government has proposed an all-inclusive wage hike with the increase to be made over a 3-year period. Under this plan, the basic increase would be up to Sri Lankan Rs. 625 in the first year with other allowances, adding up to Rs.1000 daily. Some of these allowances are based on a daily quota of leaves plucked – so many are likely to miss out. The proposed increase in basic daily pay in the second and third years would be to Rs.650 and Rs.675 respectively. However, the demand of the workers is that the daily basic pay should be increased to Rs. 1000.

The tea estate workers have no choice other than to continue their fight for a fair wage if they don’t want to succumb to enslavement or absolute poverty.